Spencer 2018-08-26 3141 Comments Off on The Iron Vow of Ulthor: Chapter 2
Actual Plays
Disclosure: This page may contain affiliate links that earn me a small commission (at no additional cost to you) which keeps this site running. I do appreciate your patronage! [more]
This post is part 2 of a series. You can find Part 1 here. 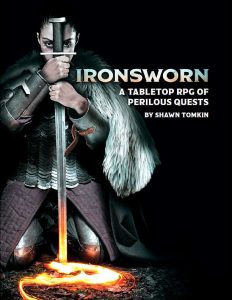 When last we left Ulthor, he’d been accused of murdering his forbidden love, Maura, and was forced to flee the port town of Ravencliff. With no friends in the place, and now the ire of a powerful enemy, he was left with no recourse but to escape to the Deep Wilds — home of the elves, the elder beasts, and horrors unknown. As a Wayfinder, however, Ulthor is not entirely helpless, alone in the forest. Or is he … ?

Ulthor arrives on the edge of the forest at dusk. The overseer’s guards in likely pursuit, he has no choice but to enter the trees. Down on supply, Making Camp seems like an impossibility.

I decide Ulthor is Out of Supply, since he had no time to prepare and simply had to run. I set his Supply track to zero and mark the Unprepared debility.

As a Wayfinder, he’s not helpless, however. Foraging around, he manages a makeshift lean-to which provides both camouflage and shelter. Shaken, alone, and both emotionally and physically exhausted, he settled in for a sleepless, watchful night amidst the intermittent patter of rain droplets on the roof of his shelter.

Does he pass the night unmolested?

Logically, this makes me think he’s discovered by his pursuers, but I can envision some other outcomes, too (in fact, I’ve had one in mind — that he knows someone in the forest). I leave it up to fate and again Ask the Oracle, on a 50/50 chance that (Yes) he’s seen by the pursuers or (No) he’s seen by something in the forest.

I consider another option: a beast or some other creature finds him. In the end, though, I decide he’s going to need help out here to tackle his vows from the outside-in.

Just before dawn, Ulthor is startled at the appearance of a masked face, illuminated by a pair of eerily glowing eyes. His heart leaps into his throat as the visage gives way to a cloaked figure, mounted upon a ghastly looking creature — a gaunt. His fears were assuaged, however, as the figure begins to chuckle, bemused at the sight of Ulthor huddle beneath his lean-to of leaves and branches. Realization comes to him as recognizes both the mask and the chuckle: his old acquaintance, the elf, Kerihu.

Kerihu is an elven Far Ranger, a guardian of the Deep Wilds. He and Ulthor have crossed paths before in the time since Ulthor left his home of Highcairn to wander in search of his destiny. Kerihu is determined to help Ulthor in what small ways he can to fulfill his vows.

The two clasp arms and exchange the greetings of old friends. Ulthor explains his predicament and Kerihu is quick to offer his assistance. He knows of an elven Mystic who lives nearby. Atani is wary of Ironlanders, but may help with nudging from Kerihu, to whom she owes more favors than he can count.

And, a little info on Atani’s place:

Atani’s dwelling lay uncomfortably close to the edge of a deep, sheer-faced ravine. Several other huts nearby looked empty and in disrepair. It seemed as though the place were an abandoned village that was slowly being consumed by the gaping maw of the ravine. Atani must be the stubborn, immovable sort, Ulthor thinks to himself.

They enter Atani’s hut. Kerihu introduces Ulthor and describes his plight. The Mystic sizes him up with a scathing eye, but owing much to Kerihu’s favors, she doesn’t hesitate to advise.

Sojourn seems appropriate here, seeking aid from these peoples, and Ulthor needs to clear his Unprepared debility as soon as possible. I roll +heart: 5+3 = 8 vs. 5, 2. A strong hit! His debility is removed and +1 Supply given. In exchange for their aid, and in anticipation of forging new Bonds, Ulthor is compelled to Provide Aid to the elves.

This aligns well with the ravine swallowing the village. I’m wondering how Ulthor can help, so I consult additional Oracles:

I imagine Atani is the last of her community. She’s watched as all the others have passed on or moved deeper into the forest, away from the encroaching Ironlanders. But why would she stay? On a whim, I pull a GameMaster’s Apprentice card and read the “random event generator” words:

The ravine… it’s not just a natural feature of the land. Instead, it’s a powerful magical barrier devised by the elves to keep wandering Ironlanders at bay. But they have bitten off more than they can chew and the ravine has slow continued to widen, despite their efforts to contain it. Atani is a warden of the barrier, and this is her promise and her plight. It’s not clear how Ulthor can help.

She’s discovered something useful in their quest to contain the barrier and slow the expanse of the ravine, but she cannot leave her post. The Warden at the southern edge of the ravine needs to know this information.

At Ulthor’s insistence to aid the elves in exchange for their assistance, Atani tasks him with delivering a vial of water from the creek that runs through the ravine to Arsula, another Mystic who lives far to the south. He vows to do this for Atani, and she hands him a glass tube stoppered with wood and wax. The water inside is a deep blue and so icy cold, Ulthor’s hand instinctively withdraws at its touch.

Ulthor takes +2 Momentum (now +3) as he takes on this new quest to Aid Atani. I feel like this is also a significant turning point in Ulthor’s other vows, since he’s escaped the city, evaded capture, overcome his Unprepared debility, and attained support from the elves. I make the Reach a Milestone move and mark 1 progress on “Prove My Innocence” and 2 ticks on “Avenge Maura’s Death”.