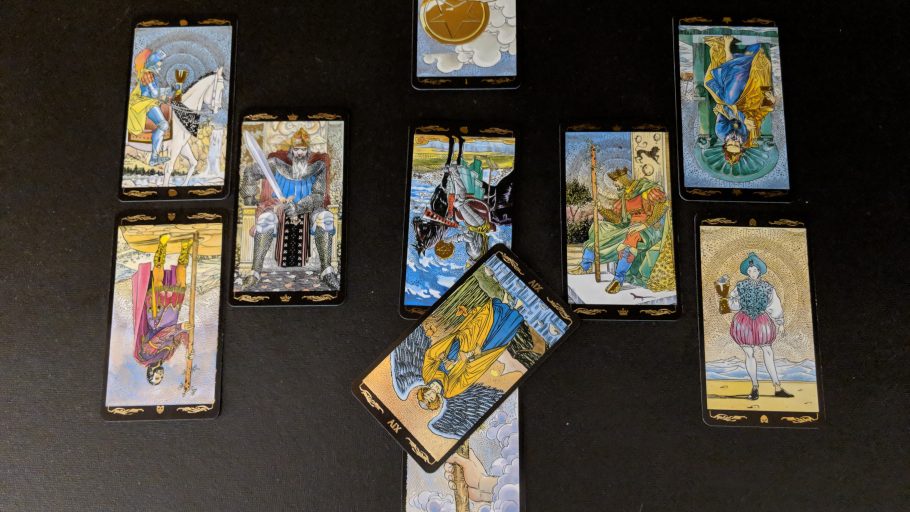 Spencer 2018-09-10 7778 Comments Off on Tarot for Solo RPG: Conflict
Resources
Disclosure: This page may contain affiliate links that earn me a small commission (at no additional cost to you) which keeps this site running. I do appreciate your patronage! [more]

Some time ago, I discovered a free game called Dungeon Solitaire: Tomb of Four Kings. It’s a “dungeon delve” game played with a deck of poker cards, not wholly unlike the Solitaire you’ve probably played before but obviously with a dungeon crawling theme behind it. I enjoy the game and I’m grateful to have it in my head (the basics are quite simple) for those times when I’m bored and a pack of cards is at hand.  To get on with the point, I shortly found out there are expanded rules for the game, called Labyrinth of Souls, which uses Tarot cards in place of the poker cards. At first, thanks to my [now mostly discarded] conservative upbringing, I wasn’t sure how I felt about Tarot cards. I also wasn’t sure I wanted to shell out $12.99 for the rule book to a card game when so many RPG titles are available for much less (even free).

It got me thinking, though. After researching the Tarot a bit, I was feeling less hesitant, and with the timeliness of a new expansion on the previous two games, called Devil’s Playground, I decided to back the Kickstarter. This gave me immediate access to the Labyrinth of Souls rules as a PDF while I awaited the new game, print books, and custom card decks (now available on Amazon and DriveThruRPG). So, I started looking for a Tarot deck…

And I kinda fell down the Tarot rabbit hole. I bought up several decks (I think I have over 10 now, not counting the Dungeon Solitaire cards) and got into researching the card meanings and traditional usage for divination and personal growth. What I learned immediately correlated with what I knew about solo role-playing — taking a few prompts from random tables, a game engine, Story Cubes, or what have you, and weaving that into the narrative context of your RPG in a way that makes sense. That’s exactly what a Tarot card reader does (except they’re telling the story of your life, if you believe it).

Of course, given that correlation, and my enjoyment of such things, I’ve really enjoyed picking up the language of the Tarot and have had designs on employing it as solo RPG oracle, game engine,  GM emulator, or whatever — I feel it can do all of these things, and more! Below, I detail my first attempt at doing so: generating a conflict to set the backstory of a campaign world (as well as my character’s role in it).

While I’m harping on the Tarot deck, I feel like you don’t need to know Tarot card meanings to employ this technique (or, arguably, even to read Tarot cards for divinatory purposes, if you believe it). It’s more about the “spread” or predetermined significance of each position in the layout. In fact, you could probably use any random generator (story dice, adventure glyphs, etc.) or just go by what the imagery on the cards tells you and come out with similar results. I’m leaning on the traditional meanings of the cards, however, and the deck in the photo is the Golden Universal Tarot. You can do the same simply by following along with the meanings given in the “little white book” that accompanied your Tarot deck, or search the web for a Tarot meaning database and use that.

I chose two specific cards because I liked the artwork on them — the King of Swords and the King of Wands — but the rest were drawn from a shuffled deck. I figure conflict equals story, so I set the two Kings opposed and drew cards for each one’s greatest strength and weakness (kinda forming two arrows — or sword tips? — pointing towards one another). In my case, these are NPCs, but your character (s) could probably be one of the opposed entities. And by entities, the opposing forces could likely be other things: groups, events, locations, etc.

What in the world are they fighting about? Well, that’s between them — literally. The card(s) would be laid between these opposing entities. I think you could do something as simple as one card to represent your character or party, or to give a high level view of the issue, but I went for a little more detail with a common “past/present/future” (top to bottom) spread between. The main point is to define what that position in the spread represents in regards to the conflict before plugging a card in there.

The 10th and final card represents the player-character(s)’s role in this conflict — in this case, “standing” between the present and the potential future in the past/present/future spread. Whether that means prevention (of a negative outcome) or facilitation (of a positive outcome… hopefully), is all in the cards (you see what I did there??). 🙂

Using the above as an example, here’s where my card’s fell (again, I chose the two King cards in opposition manually, but a random draw would do, too).

1. Person 1 — The King of Swords. The cunning King who’s won his position through much strategy and, aye, bloodshed. He’s not cruel or unjust, but coldly calculating, ever seeking to maintain his power and manage his domain.

2. Person 1’s Greatest Strength — The Knight of Cups. The son of the King of Swords: the public face of his family, his heir and his future. The son loves his father and his family well, even seeking, at great lengths, to earn his father’s favor. But, the young man lacks his father’s cold logic. Instead, he is a compassionate and caring man and the people love him.

3. Person 1’s Greatest Weakness — Page of Wands (reversed). The younger daughter of the King of Swords. The princess has a fire within her that cannot be tamed. She resents her feminine position in the world, of presumed weakness and inferiority, the putting on of airs, etc. She brings much heartache to her father as she bucks tradition and is incessantly stirring the calm waters of his kingdom.

4. Person 2 — King of Wands. The passionate King, the usurper who compelled the masses to rebellion of their tyrannous masters. He rules by whim, but is well-loved by his peasantry and gentry alike. Or so it seems…

5. Person 2’s Greatest Strength — King of Cups (reversed). The usurped tyrant. The man was a manipulator who derived much pleasure from playing at the emotions of others — and the conflict and drama that ensued.The people’s liberation from this corrupt dictator affords the King of Wands much support and favor from his followers, but how long can that last in absence of true leadership?

6. Person 2’s Greatest Weakness — Page of Cups. The former King was no stranger to the sheets and no doubt many a maiden fair have given birth to a bastard of the King of Cups. Will one rise from the ashes of his inheritance to reclaim the throne from the usurper?

7. The Issue: Past — Ace of Coins (reversed). The Kingdoms began on good terms. A truce, trade agreements, and cooperation would have been a boon to both communities. However, something ran afoul. The Kings disagreed, opportunity was missed, and enmity took root. Troubled times began.

8. The Issue: Present — Knight of Coins (reversed). On the border of these two realms lies a once-prosperous trade route from the North’s natural resources, travelling through the Kingdoms and their skilled tradesmen, and on down to the port city in the South (whence came finer goods from distant lands flowing back through to the North). The two Kings now vie for control of this trade road, but in the course of their endeavors, have thus far only caused pain to all, including their neighbors North and South.

9. The Issue: Future — Ace of Wands. Tensions are rising as the two Kingdoms play out their cold war for the trade road. The fiery merchant kings of the South grow weary of their harried supply lines, as do the rustic Northerners who depend on imported goods faced with a land of frigid and crop-less rocky soil. As the Kings choke off precious goods, the flames of a four-way war are kindling while other, less visible forces smell opportunities to further their own desires. Is it too late to douse these smoldering embers?

10. My Character’s Role — XIV Temperance (reversed). Through whatever course of fate, my character is compelled to stand between the present and the potential future. I first read this card as upright, indicating my character might serve as moderator, seeking to find resolution and middle ground between the two Kings. Instead, the card is reversed, which flips that idea on its head, so to speak (*chuckles*). No, instead, my character might be of the shadier variety, seeking to tip the scales in favor of one Kingdom or the other, through whatever trickery, subterfuge, or nefarious deeds might be necessary “for the good of the realm”! 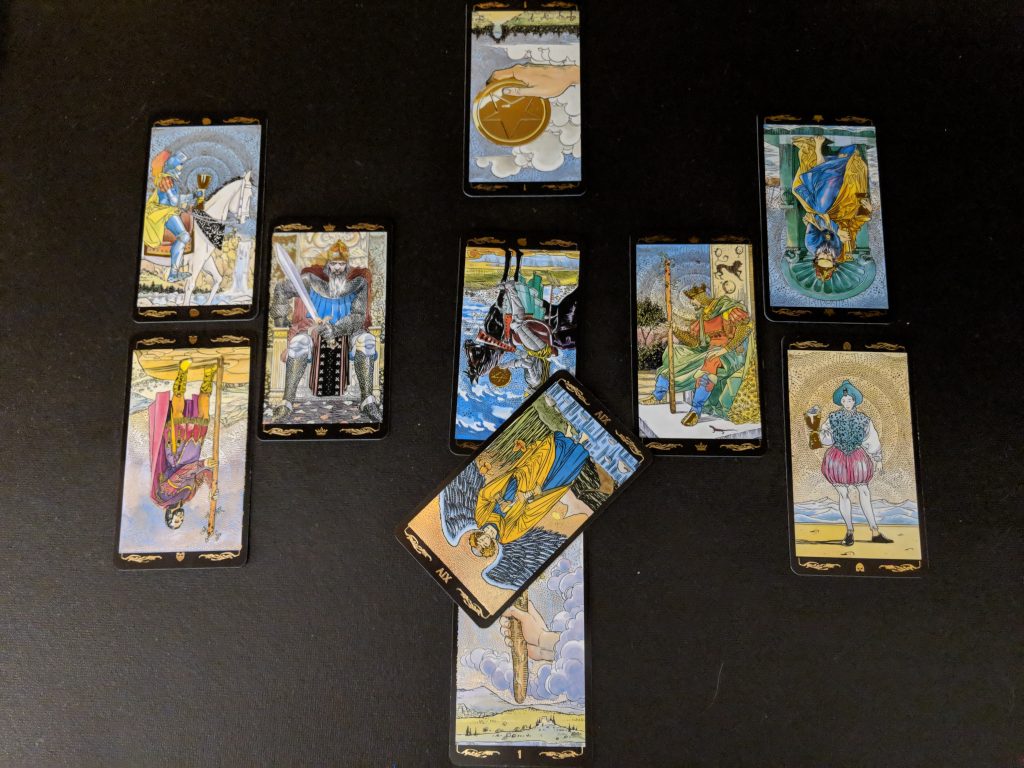 I came into this with just a pair of cards set in opposition, with no preconceived notions of what that conflict might be nor my character and what their role in the conflict might be. After this exercise, my imagination is running wild with possibilities and I can take this information I’ve created with the cards and run with it.

Though I started out with no clear idea for a character, I’ve now got some direction and can work to flesh out their background more from my imagination (it’s hard not to think of Varys the Spider from A Song of Ice and Fire), or, just allow their role in this conflict to define them. Perhaps better yet, I can use a follow-up spread to find out more about them. I may just do another simple Past/Present/Future spread for him, but I think I might take this “arrow” layout, halve it,  and employ that again: with a card for my character, his strengths, his weaknesses, and a Past/Present/Future.

Is this “too much work” for the average bloke? It took me about an hour, writing it all out and pondering some in between, but I found it a rewarding experience in itself and feel like it produced a rich starting point for an interesting story. Please share if you give it a try!