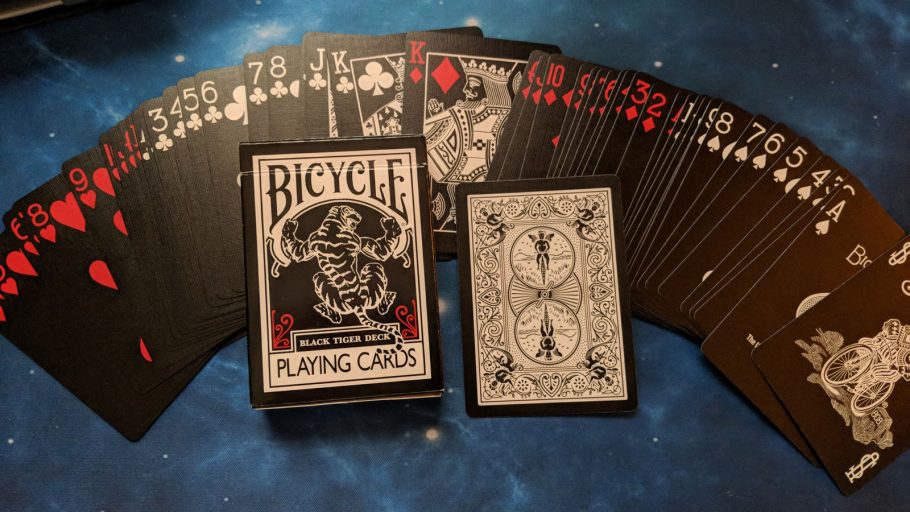 Spencer 2018-07-03 12634 Comments Off on Cards and Role-playing Games
Resources
Disclosure: This page may contain affiliate links that earn me a small commission (at no additional cost to you) which keeps this site running. I do appreciate your patronage! [more]
Update (2018/07/08): I shared this post on the Lone Wolf G+ group and they came back at me with even more card-based recommendations, so I’ve added them to the list as well. Thanks Lone Wolfer-ers!

A few months ago on the Lone Wolf Roleplaying G+ Community I inquired as to whom might be using cards in their RPG sessions. I’d started out shying away from cards, preferring to soak up the nostalgia of rolling polyhedral dice, but have recently become more intrigued by cards thanks to playing the Dungeon Solitaire games. I started snatching up cards left and right and now have several decks piled about, including the complete GameMaster’s Apprentice decks from the recent Fantasy Deck Kickstarter.

The results were somewhat surprising, to me at least. A good 60% or so have used cards in one form or another on occasion in their role-playing games, with the GMA/Other category leading the pack over playing cards and tarot cards. The G+ gang was also kind enough to share some card game and tool suggestions, which I’ve accumulated here and added in a few others I’ve found. I hope someone finds it useful!

A note on Tarot: I was turned off to tarot at first due to the negative connotations certain peoples hold. To each their own, but I hope you’ll take the time to research tarot cards yourself before forming an opinion.

These games involve cards as a core mechanic in some form. 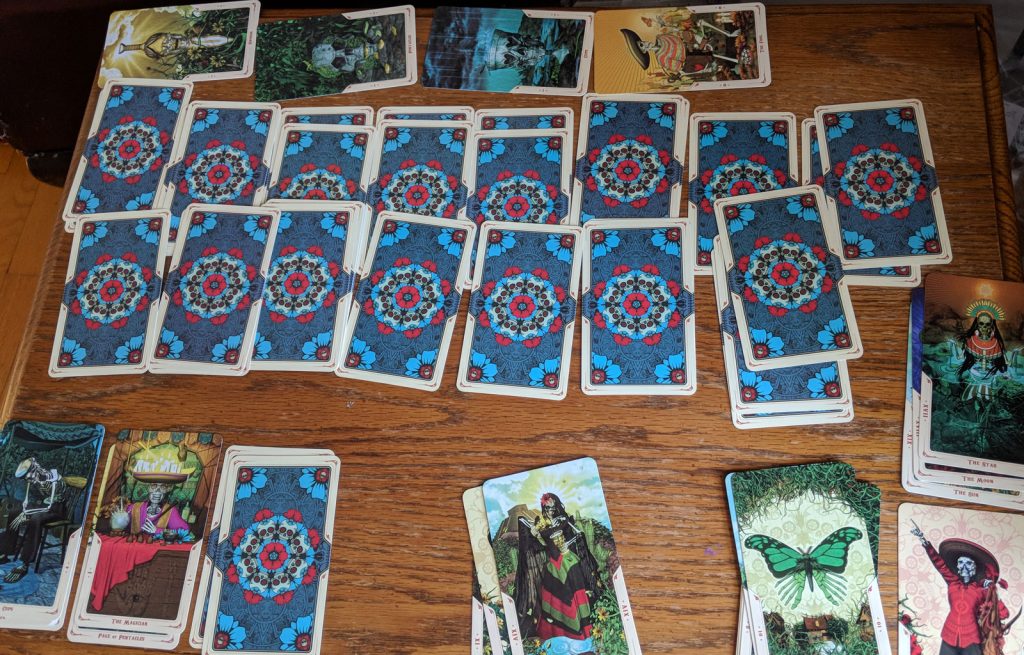 A game of Dungeon Solitaire played with the Santa Muerte Tarot deck.

These tools use cards to resolve conflict, generate ideas, or otherwise inspire your game.

Apps That are Card-Based

Not exactly cards, but card-like applications.

Turning the thing on its head — these are dice that emulate cards or serve a similar purpose.

Neither Dice Nor Cards

Along the same vein, these games/tools do not use dice or cards, but some other instrument:

If you thought the poker cards with your company’s logo on them were cool, wait til you see these… Most of the below links are affiliate links to Amazon or DriveThruRPG, where your clicks help fund my RPG (and card) habit.

Playing Cards can come in all varieties, and I’m sure you’ve seen your fair share. Below are some neat ones I’ve come across. The Bicycle cards I find to be good quality, but what’s on the box is not always what you get: case in point, the “Black Tiger” cards pictured on this post — the tiger drawing on the box is not included anywhere on the deck, but it’s still one of my favorite decks!

If you like to take your cards camping or are otherwise prone to spilling liquids and dirt on them, then check out a PVC/plastic deck like these Hoyle Clear Waterproof cards (these have a very “slippery”, smooth texture to them compared to your standard coated card stock — so they’re also a little more prone to 52-card-pickup incidents).

Tarot cards originated as early as 15th century as  a card game of “trumps” and is still played regularly this way across much of Europe. The word “tarot”, in fact, is a French word with Italian roots, and essentially translates to “trumps”. The ubiquitous 52-card poker deck we Americans are all so familiar with are a very close cousin of the tarot and the “divinatory” purposes of the cards — both Tarot and other playing cards — came about as a secondary purpose, mostly among English-speakers, a couple hundred years after the fact.

There are several Italian, French, and German variations on the tarot, but for the purposes of RPG oracles, you’ll probably want a deck that’s a derivative of the Rider-Waite-Smith deck, which carries symbolic imagery on every card, including the numbered “pip” cards of each suit. Compared to your standard poker deck, you’ll find 4 corresponding suits and 10 pip cards per suit (Ace through 10), but the “court cards” or “face cards” of the tarot include 4 cards instead of 3 — these 56 cards form the “minor arcana”. The biggest difference in tarot and poker cards is the “trumps” suit, which consists of an additional 22 “major arcana” cards (bringing the total to 78 cards in a deck). The “little white book” that comes with most decks can explain the significance of each card and suit if you aren’t using a specific game or tool, and this book and the deck can serve just fine as a solo RPG oracle all on its own.

Be careful before venturing down this rabbit hole — there’s as many different tarot decks out there as hairs on the human head (maybe more, I’m just guessing at the math here), and you may end up like me, with several decks with different themes. The Lo Scarabeo decks I’ve found to have some pretty great artwork, but not super high quality cards, so read reviews (and customer photos) before your lay down your hard-earned cash.

What Have I Missed?

This is a topic that still interests me, so if I’ve overlooked any RPG-related games, tools, ideas, or concepts that include tarot or poker cards, runes, or other non-standard devices, do let me know! Above all, I hope this serves as a good resource or starting point for your next dice-less RPG session. Happy trails! 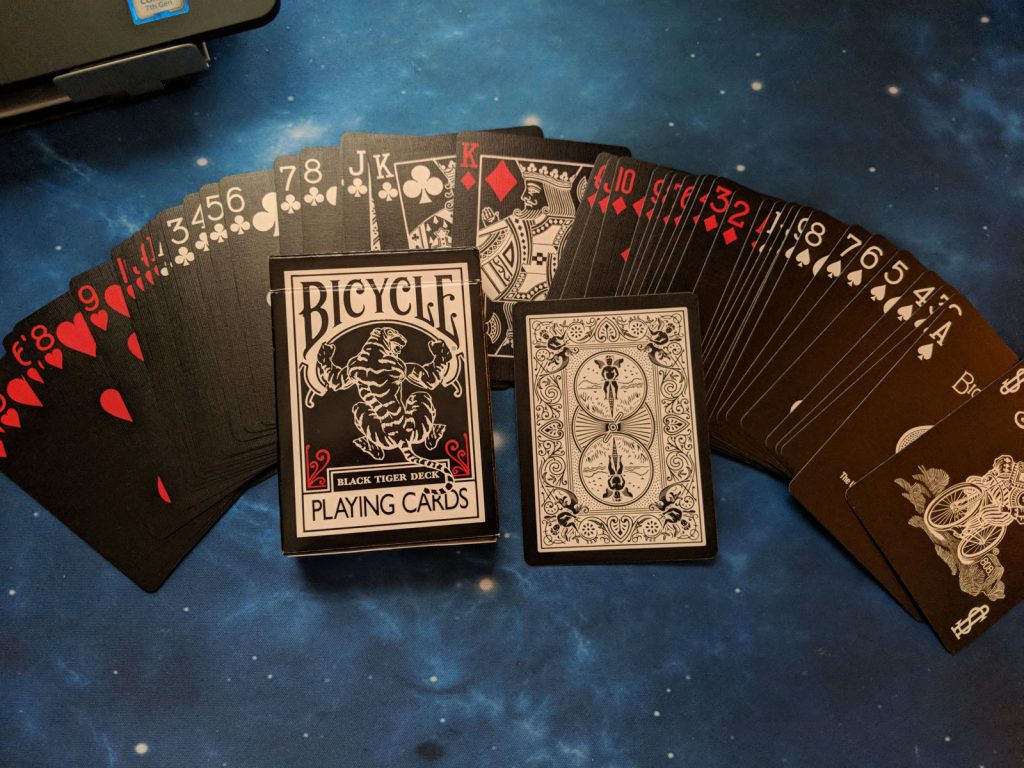